It’s not too late to make a contribution by clicking right here.

The city of Cusco in Peru is decked out in rainbow flags, so much so that upon our arrival we joked that it looks like an over the top gay pride extravaganza. Turns out that the Peruvians consider the rainbow one of their most important totems and every day is a rainbow celebration. This rainbow totem has become very dear to me too, especially as it saved my ass during an epic 10k swim down the Hudson River last weekend. More on that in a bit.

On one of our first day trips from our homebase of Pisac in the Sacred Valley our teachers brought us to Wallkai Willka, a sacred waterfall whose name means “The Rainbow Waterfall.” It was a dramatic drive through the Sacred Valley and and then up and over the serpentine Andean ridge. During this drive we saw what was basically an Incan travel plaza. The long distance runners paused there for fresh water – and also to deposit their fatigue into an enormous stone called a Wakka. Yeah, I think we should put some giant Wakkas in strategic places all over Manhattan. A place for us to deposit our grumpy exhaustion sounds like a most excellent idea.

After a nice picnic lunch and about half a dozen cups of coca tea, we made our way up to the waterfall. Our teachers told us that this particular waterfall had called them there as a place from which to explore the source energy of the mountains nearby. The water flowing down holds the wisdom from the surrounding glacial mountaintops. And in the celestial tradition, mountain peaks are like accupuncture points on the human body. Except these points connect to the greater body of the universe – and to distant star systems and supernatural worlds in other galaxies. Let’s just say their worldview is REALLY expansive. This particular place had given them quite a charge – for days after their discovery of it they couldn’t sleep – and it took them some time to understand how to hold the vibrant energy of the place. They talked about this place as a generative spot for creativity as well as spiritual cleansing. They described the earth – Pachamama – as an infinitely creative power that holds us and gives us life just like our own mother. And that this spot was a perfect place to initiate ourselves more deeply into the inherent creativity of the Andean Cosmology. A place of birth. Interestingly, after visiting this waterfall and connecting to its energy, at least two women in our group who hadn’t had their period in many years started to menstruate.

We cleansed our hands and faces in the icy cold waters of the falls and those in our group who already carried a mesa, or a medicine bag of sacred stones called cuyas, ritually cleansed that as well. We meditated next to the falls for what seemed like hours but was probably about 45 minutes. The misty wind off the edge of the falls was so freakin’ cold as it dove into the folds of my wool garments and scraped against my nerves. I think it was here that we learned one should turn inward to meditate with an open mouth, breathing through both the mouth and nose simultaneously. That was so different than anything I’d learned in the yogic context it was a challenge at first. Plus as a kid my dad used to tell me “Close your mouth! No one likes a mouth breather, makes ya look dumb!” Probably in the Indian landscape it’s generally best not to breathe the fecal air of the temple through one’s mouth, whereas the Peruvian vibe is like so CLEAN it’s practically stamped USDA Organic. Sitting there with a slack jaw and and open mouth seemed to create a deeper opening inside me. Like my loose jaw opened something subtle low in my gut. During a lot of this meditation I kept my eyes open and as I stared at the black, wet rock behind the waterfall I could see the stones shapeshifting into faces and jaguars and birds and all kinds of wonderous forms. The animistic totems of the Andean Cosmology spun before me like a kid who turns clouds into animals and other shapes. Trippin!

We were called out of this meditation and brought into a circle with the rest of our group. At some point we did another hug ritual as I described in one of my last posts, embracing every member in our group. Our group was becoming really cohesive by this point and all the ritual embraces worked to fuel the love we were starting to have for the Andean Cosmology. Then we sat on the earth again for more open-eyed meditation and were given the instruction to look up at the horizon, where the jagged mountains met the sky. Something curious happened to me and I figured out why this waterfall was called the Rainbow Falls. As I looked at the place where the earth met the sky, the entire sky started to fill with an intricate matrix of rainbows. Hundreds and thousands of interconnected rainbows weaving through the sky then touching the earth then creating a complex web of light between every object in front of me, including all the members of our group. Oh my god. And I’m not even on drugs. Breathless, I started singing along with Kermit the Frog in my own mind as I recognized profoundly that the whole world really IS a rainbow connection for the lovers, the dreamers and me. This vision lasted for just a few minutes but made an indelible impression of my heart, mind and body. 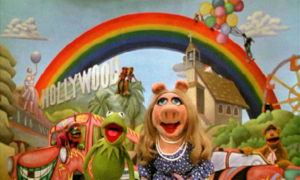 Last weekend I participated in America’s largest open water swim. A 10k race down the Hudson River organized by NYCSwim. I trained for it by just swimming, like a whole lot, during August and September. I wanted to do this swim for the same reason we went to Wallkai Willka, to connect literally and spiritually to the source energy that flows from the north towards NYC through the Hudson River Valley. I thought it’d also take my urban shaman profile up a notch in ways I couldn’t yet imagine.  Since coming home from Peru I’ve also been more intrigued to connect on a subtle level to my ancestors. And I know that the Swedes and Norweigans who are my lineage must’ve been masters of the water. As I jumped into that 67 degree Hudson in my black and gold Speedo (another nod to my childhood roots of the 3 Rivers of Pittsburgh, Pa) I was like holy shit, I’m never gonna finish this. I’m going to die. Today.

Then I just swam and swam and warmed up and I felt amazing. At times during my swim I felt more powerful and more free than I’ve ever experienced. And then I reached Sputen Duyvil, the southernmost section of Riverdale where the island of Manhattan comes to a head in Inwood. “The Devil’s Whirlpool.” Suddenly the water became very, very cold again and I became aware of a powerful cross-current. I started gagging. Hard. Pausing to tread water I lifted my head up and couldn’t see the next marker, nor could I see another damn swimmer. No helpful guardian kayakers anywhere nearby. And that police rescue boat was really, really, REALLY far away. Gagging and coughing like a maniac I realized that this could easily be the end of me. Here I am, floating along all by myself, gagging and wheezing. I told myself this must be part of the cleansing process, don’t freak out, just find your breath. As I regained composure the sun came out and several hawks flew right over my head. Close. A gift of strength. Keep going. As I swam again I started to see in the brown salty water ahead of me the same scene I saw at the Rainbow Waterfall in Peru. A matrix of color – spinning and crescenting and interlacing in front of me. Just a momentary flash of fear, “oh god I’m about to have a seizure.” But no, I knew it was another gift from the Andes. A reminder that this swim is giving birth to something new in me, a courage and conviction I didn’t know I had before. At the same time, Akhilandeshwari’s root mantra entered my mind and breath and body like that goddess herself was screaming her power into every cell in my body.

The whole swim took me 2 hours, 10 minutes and 51 seconds. That’s a long fucking time to swim continuously. Not only did I have a potent connection to my Andean experience, but the whole swim was an epic practice of mantra. I’ve been steadily collecting and initiating the powers of the gods through meditation for more than 10 years, learning most of them through the heart of my tantric lineage as elucidated by Douglas Brooks. As I swam, I invited these old friends to come to me. I tried not to initiate them myself but rather listen for them, receive them as they wanted to come. It was surprising at times who showed up. Baby Ganapati, the first and most simple practice I ever learned, brought me so much joy, laughter even, as I swam. The practice of mantra is said to give us access to non-linear time, eternal time. That 2 hour swim felt like 20 minutes. And also like 2 days. I’m still remembering little moments of it all these days later. To swim the river like this is to experience the full spectrum life’s essential flavors. I highly recommend it. So who’s in with me next Fall?

We are all great rivers flowing to their end

and rain that has fallen for millions of years.

All this makes us cloudy with mud

Unable to see ourselves.

As we reach for clarity and the open sky

Come now and be blessed.

This entry was posted in Uncategorized. Bookmark the permalink.